WORST ACCIDENT IN THE MODERN HISTORY OF MALAYSIA 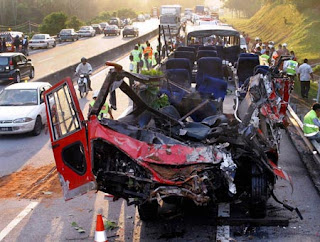 My apologies to those who are reading this entry. It is a very negative title for an entry right? But this is the talk of the town since the "Super Express" belonging to Syarikat Kenderaan Bukit Gantang became a "Super Horror"!!! At first I heard that there were 20 deaths, unfortunately, a few days after the accident one of the seriously injured victims (a three year old child) passed away. That gives a total of 21 deaths and almost ten people injured, I think.

Everything that happened has been fated. Yes, true. But to discover that the "Super Driver" had 13 summonses and two warrants of arrest for traffic offences is beyond human comprehension. Obviously some authorities in my country, , which will celebrate its 50th year of independence, are not doing their job :(

Forget about the call for the setting up of a royal commission to investigate accidents involving public transport. Set up a ROYAL COMMISSION (Suruhanjaya Bebas) for this and for that!!! It is a waste of public fund. The public is tired, angry and feel cheated by the so many royal commissions being set up only when the issue is being debated. What happens after a few months???

Today, slightly a week after the tragedy of the “Super Express”, the newspaper / television is still reporting about accidents involving drivers of express buses who have summonses for road offences. I wonder if this is happening only in my country or there are other countries that you can get such ironic and absurd news!

GETTING TO KNOW ME

Madame A
I am married to Abd Rahim Ahmad, a Kedah guy. I first met him in the land where you can find many kangaroos and koalas! We got married on 12 April 1985, can't believe it sometimes.... Come to think of it, I might be the oldest, female blogger in Selangor!!! I am blessed with 3 girls and a boy - Arifah, Afifah, Afiq and Atiqah. All my children have names that begin with the letter "A". The reason is obvious.(Would you like to guess?) Arifah and Afiq are married. I now have 3 grandsons, Anas Zaim and Ammar Zaid are Arifah's son. Adam is Afiq's son. Arifah is married to Shafiq Ashraf. And Afiq is married to Ummi Fatehah.